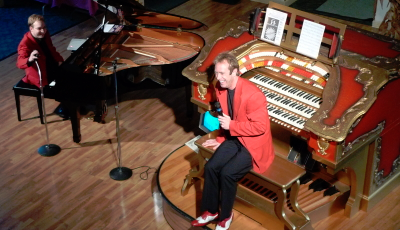 The historic Grand Ledge Opera House is a tribute to a town embracing its past while moving into the future.  The building opened in 1884 as a roller rink when Grand Ledge was a thriving tourist town.  It subsequently became an opera house:  a home to traveling theatrical shows as well as athletic and school events.  Later the building became a movie theater, furniture store, and a warehouse.

The Opera House was reborn in 1993 after careful restoration involving the whole community.  It is now a charming building available to all.

The Opera House is not owned or operated by the City of Grand Ledge nor are the gazebo or grounds a city responsibility. The Opera House is a non-profit organization overseen by a seven-member community board known as the Opera House Authority. The maintenance of the building and grounds are paid for by rental fees and the contributions of individuals and businesses through membership in the Friends of the Opera House, auxiliary members through the Grand Ledge Chamber of Commerce, and underwriting of specific community programs and fundraisers.