By the 1880s a roller skating craze was sweeping across the country. One of the first mass producers of roller skates was Micajah C. Henley of Richmond Indiana. Starting in 1881, Henley manufactured the ‘Chicaco Skate’ which would become world renowned as one of the best skates available.

Capitalizing on the new sport and on the prospering Grand Ledge resort trade, J. McPeek, a Grand Ledge businessman, and Edgar Marvin, a local photographer, hired Russell F. Tinkham to build the Riverside Rink at 121 South Bridge Street in 1884. One of the first roller rinks in the area, the Riverside Rink opened on August 15, 1884. After a year in operation, McPeek sold his interest in the business to Peter Blake, owner of an Eaton County cheese factory. Within months, Blake bought out Marvin’s share to become sole proprietor of the rink in early 1886. 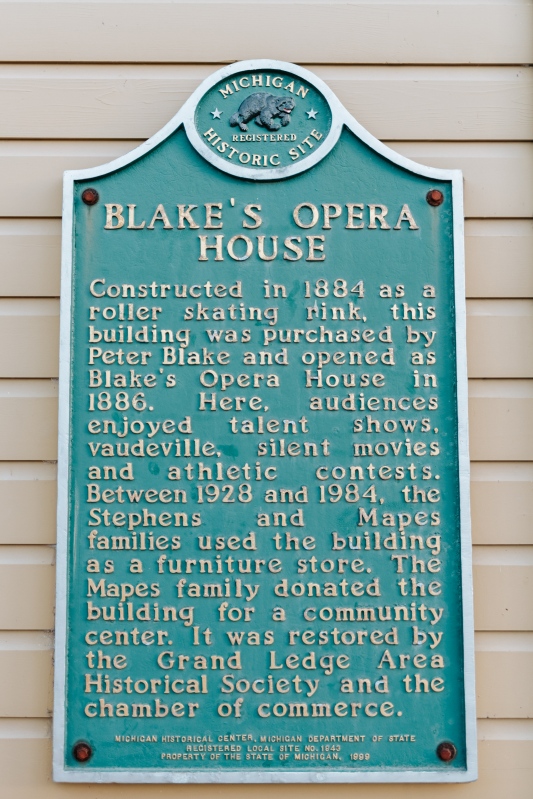 Later that same year on March 12, the Grand Ledge Independent revealed Blake’s plans to convert the skating rink into an opera house. Blake commissioned Charles LaFont, a scenic artist from New York City, to construct the portable stage and scenery painted on rolls of canvas suspended from the ceiling, while Tenie Rall,  a local craftsman, adorned the walls and ceiling with decorative paperhanging. With the Mackley-Salisbury Comedy Company as its featured act, Blake’s Opera House opened on May 12, 1886. Soon after buying the building, Blake bought the “Old Grange Hall” and moved it from the corner of Scott and Franklin Streets and attached it behind the new Opera House. The downstairs of the Grange was storage, while the upstairs was living space. In later years, the Opera House, now called Sackett’s Opera House was used to show early silent films as a “theatorium”.

The Opera House was converted into Stephens Furniture store in 1928 and later was the home of Mapes Furniture. In 1976 the former opera house, dubbed Heritage Hall, was the Bicentennial Committee’s headquarters. In 1984 the Mapes family, donated the structure to the Grand Ledge Area Historical Society to house its growing historical collection. 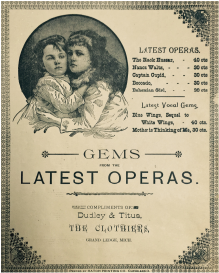 The building which is situated downtown on a large piece of ground along the Grand River provides a picturesque setting for weddings, receptions, and other large gatherings and community events. The Grand Hall on the main level will accommodate 220 at a sit-down dinner. The main floor also houses an antique Barton Theater organ which was originally used in the Michigan Theater in Lansing and lovingly restored by the Lansing Theatre Organ Guild. Organ concerts are scheduled regularly and often provide entertainment at parties. The Terrace Level accommodates 160. There are catering kitchens on both levels.